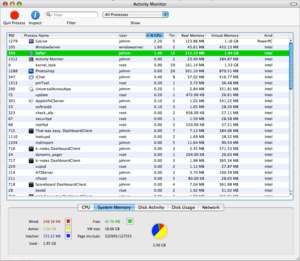 Oh what I would give to have a version of Safari that didn't PISS memory all over the place. What is a memory leak? Basically it is when a program doesn't give back memory when its done using it. So as you use the program, it keeps grabbing more memory for all the new things you are doing, but it doesn't "release" the memory it is done with. So it sucks up more and more and more memory until you quit it. Quitting programs does "reset" their memory usage.

Memory leaks won't use "all" of your memory though, because thanks to complex Virtual Memory systems, your computer actually has an unlimited (well, as large as your hard drive is) amount of RAM. So you won't run out, you'll just get unbearably slow.

Anyway. My Mac Pro has 2 GB of RAM. Thats a lot. I had about 10 Safari windows open, plus GoLive, Photoshop, Preview and some others while I was updating my MacFixer Store web page. The more used Safari, the worse it got. 1.94GB by the time I was done, and I wasn't working on it all that long. The pie chart at the bottom shows usage. Basically had no free memory. Hopefully once OS X 10.5 comes out, things will be better. I could also use another 2 GB of RAM I guess.