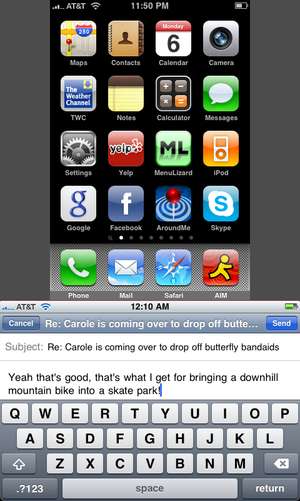 I've been using the new iPhone OS 3.0 for over a week now. I have to say, I finally feel like my iPhone is the powerful device it's supposed to be. There are many features under the surface that Apple likes to go on and on about. But I want to tell you about the features you will notice. Also keep in mind I'm using iPhoneOS 3.0 on a 1st generation iPhone, not a G3/G3S.

The phone app isn't the only place you'll feel a boost. The whole phone feels faster, like there is less delay when you click or swipe on the phone. Thing's just happen.

My favorite new feature of 3.0, the thing I've been dying for, is the Landscape (aka wide) keyboard. Thats when you turn your phone sideways, and the skinny little narrow keyboard turns into a wide keyboard. Apparently my thumbs are much bigger than Steve Job's thumbs. But I find it very difficult to type a lot of text on the narrow keyboard. But with all of Apple's apps now incorporating the wide keyboard, I feel like my iPhone finally is that "Internet Communication Device" Apple first advertised it as. I have 6 email accounts set up on my phone, and now I can reply to emails with ease. And without giving very short, abrupt replies. The same goes for text messaging. I've never gone over my 200/month limit before, but I might end up going over now that it's such an ease to type.

Push notification is finally here. You can receive messages and sounds from apps on your phone, when they are not even running. You can talk to your friends on AIM, then switch to Mail, and still get instant messages from your friends. It really gives you the ability to multitask.

There are many many other improvements, but those three are the ones that really effect me the most. I use my phone much much more these days, because of them.