What To Do With .dmg Files 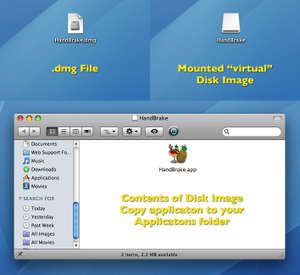 Everyone knows Macs are easy to use. But one aspect of Mac OS X continues to confuse the less nerdy among us. This is the Disk Image file.

In the old days, you would install software onto your computer by inserting a CD ROM, or even further back, a floppy disk. Usually that disk would have an Installer. You would double click that and you're on your way.

These days, most software is downloaded over the internet. Mac OS X has popularized the use of Disk Images (.dmg files) as a means of transferring software. They're easy to use once you get how they work.

The .dmg file is the actual file that contains all the data. When you double click the .dmg file, it mounts a "virtual" disk to your desktop. It's usually a white icon but it can be a custom icon.

But wait, sometimes the application itself isn't sitting there on the disk image. Sometimes there is an installer on there instead. There are two kinds of installers, package installers, and custom installers. Package installers have a neat "opened box" icon, and are usually a .pkg file. Other kinds of installers could be anything, and have any kind of icon. Installers pretty much always work the same though, just double click to run through, then you're good to go. After running the installer, you are again free to eject the disk image, and delete the .dmg file.

It may seem like installers are an easier way to get software, but the disk image with the application directly on it is actually the preferred way to get software. Installers can be installing all sorts of files, all over your computer. With an application directly on a disk image, you know what's on it and you know where it's going, because you are putting it there.

So in summary, when you download a disk image that contains the whole application on it, simply copy it to your Applications folder, then eject the disk image and trash the .dmg file.

And the most common application that comes this way is without a doubt, Firefox. If you're not sure what I'm talking about, just give it a download.