The Hole in Apple's Lineup 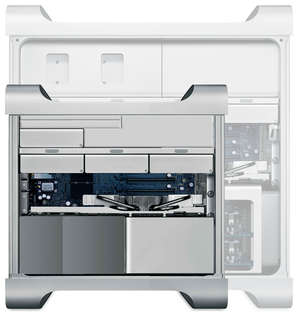 Years ago, a small section of the Mac community would often complain that Apple should release a "headless iMac". The rest of the Mac community argued that this made no sense. If you want an all in one, buy a G4 iMac ($1300). If you want something headless, buy a G4 tower ($1700). Apple eventually even released the Mac mini ($500). The idea of a headless iMac made very little sense.

But times have changed. iMacs have become a significantly more powerful machine. iMacs have more than enough power for the average Mac user. Very few users need the processing power of a Mac Pro. But many users do still need the expandability of a tower. This can be a problem because unlike the days of the G4, the Mac Pro towers are extremely high priced. They start at $2500 and the current high end models are as much as $5000. A computer that expensive is not a good fit for someone that needs no more CPU or GPU power than an iMac, but needs maybe one or two PCI cards installed, and could benefit from more than one internal hard drive. Adding to the difficulty of "getting by" with an iMac, about half of Mac users prefer n anti-glare screen, but Apple has no anti-glare option on iMacs. Also the iMac has only one FireWire port, and zero eSata ports.

So the hole in Apple's lineup is a product for people who would be perfectly happy with the processor and graphics power of the current generation of iMacs, but need some amount of expandability, and would prefer anti-gloss screens. This machine would also appeal to a large segment of the PC user population that still cling to towers for their tinker-ability. This 4th model of desktop computer really didn't make sense 8 years ago. But things have changed significantly since then, most importantly including Apple's market share.

The image included with this article is not a spy shot. It's just a quick photoshop mangling of a photo of a Mac Pro. Replace the two full size optical bays with a single slimline drive, remove one of the PCI slots, replace the server class Xeon processors with Corei5s and Corei7s, and replace the fully buffered, super hot RAM with several (8) standard laptop DDR3 slots. This artwork is to scale in front of an actual Mac Pro. This would be a great little Mac. My prediction: This Mac will never happen. Apple does not have much interest in desktop computers. Every engineer working on a desktop Mac, is an engineer not working on iPad 2 / iPhone 5 / MacBook 19.