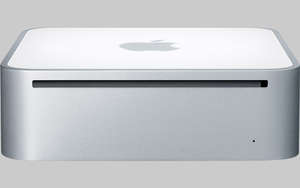 As of this posting, Apple's Mac mini has gone 509 days since it's last update. That's nearly 17 months. That's a VERY long time, an eternity in computer years. Finally, it looks like an update is eminent, and with it comes my New Mac mini Specification Predictions!

The Case: I think they are going to remove the white plastic from the top, and have the top piece be a solid chunk of aluminum, similar in style to the main body of the new MacBooks. I also think they will find a way to make it a little smaller. Not much, but I'm sure they'll have a very exact number for just how much smaller it is. I'm going to say about 10% smaller.

The Innards: On the inside, I'm nearly certain they will upgrade it to the new nVidia chipset they use in the MacBooks. This includes the integrated 9400m graphics. Current mini's come with 1.83 or 2.0 GHz Core 2 Duos. New mini's will likely see a modest boost to something like 2.0 Ghz to 2.4 GHz, or maybe 2.2 GHz to 2.4 GHz. They are probably going to use a soldered-on processor like the laptops currently use, instead of the upgradable processor slot that current minis have. Mini's have always used laptop hard drives, so SSD will probably be an option, even though there's not much mass appeal there. Also this new nVida chipset means an upgrade to a 1066 MHz bus and DDR3 RAM, again matching the new MacBooks. And the Max RAM will officially be 4 GB. It may be one of the many Macs that can unofficially hold more but who knows.

I/O: Bye bye DVI port, hello Display Port. Other than the hassle of having to buy a new Adapter to make your old monitors work ($20 for normal displays, more for a dual link adapter for 30inch displays), this won't mean much to anyone. Also I think the new mini WILL support a 30" display at full resolution, for the first time.
Here is the sad part. Like the MacBooks, I predict FireWire will be no more. Your four USB ports will be all of your I/O. Getting rid of FireWire is such a horrible thing for apple to do to it's computers. FireWire is so versatile, and can do so many things that USB cannot. But, despite that, I predict Apple is going to get rid of it.
The mini will also be upgraded to n speed wireless.

And those are my predictions. I also think/hope they will drop the price points back to the original entry level mini price of $500. That would be sweet. We'll see.

And now, my mini wish list. Things I want to see, but I highly doubt I will.

FireWire 800: Not only should they keep firewire, they should upgrade it to FireWire 800. Thats about 100 MBytes/sec. That's pretty good. Especially if you are using a raid, 'Regular' FireWire aka FireWire 400, and it's 50MByte/sec throughput, is not going to be enough. And forget about USB puuhhleeeeze.

SATA with Port-Multiplication: The SATA specification has a feature that lets you hook up what is basically a SATA HUB to an SATA port, so you can hook up as many as 5 independent SATA drives to one SATA port. A 3Gbit SATA port can do 375MBytes/sec. But the SATA port has to support this feature, for you to use one of these Port Multipliers. So the feature I want to see is for the built-in SATA interface that the mini's internal hard drive is attached to, to support Port Multiplication. This would make it very easy for hardware hackers (the good kind of hacker, not the bad kind) to remove the internal hard drive, route the internal SATA port outside, and connect it to a 5-Bay eSata drive tower. With this and FireWire 800, the mini would go from a Max theoretical throughput of 50 MBytes/sec to a theoretical max of 475 MBytes/sec (ignoring USB). They could even design the new case in such a way that it would be easier to poke a little hole in it somewhere, to run an SATA cable through. A mini like this, with Core2Duo power, 4 GB of RAM, HUGE data I/O, and super low power consumption (minis use on average 20 watts of power), these minis would be incredibly versatile, while still being a great simple basic Mac for the brand new Mac user.

Dual Display Ports: With the switch to Mini DisplayPort, there's more than enough room for two display ports on the back of the mini. And I'm sure a 9400m can handle dual displays. Every video card since the early 00's has been able to do that. (except maybe Intel integrated graphics?).

ExpressCard Slot: Last but not least... actually last and least (likely to happen), the ExpressCard Slot. 15" and 17" Mac laptops have had expansion slots forever. From PCMCIA/PC Card to Cardbus, to the now modern ExpressCard34 and ExpressCard54. This would be, the least likely thing for Apple to add to a mini. But it would be pretty awesome if they did. This would make the mini a hacker's dream. One possibility would be to make the built-in Airport Card an ExpressCard, that way hacker-types could remove airport, and put in a 3rd party express card if they wanted something like more FireWire ports instead of Airport. That would be sweet.