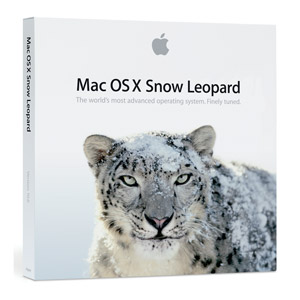 The next version of Mac OS X is here. Version 10.6, codenamed Snow Leopard. It is significantly cheaper than all of the recent previous versions of OS X. I believe the reason for that is simply that on the surface, it doesn't look very different at all. It does have a lot of under-the surface features, but for the user, it looks and feels pretty much the same.

The most significant change is that this operating system only runs on Intel-based Macs. PPC Macs, G3s, G4s and G5s, are all now officially obsolete and no longer supported by the most up to date Mac OS version.

The main feature this upgrade brings is greater optimization and performance.
With most of the PPC code stripped out, the operating system as a whole uses a lot less space. In fact, upgrading to Snow Leopard will actually free up several GB of space on your Mac. Apple has also upgraded almost all of their apps to 64-bit.

Apple also introduced two new technologies that you really won't feel at all now, but down the road they will make a huge difference. Applications on the Mac will be significantly faster. The names of these two technologies are Grand Central Dispatch, and OpenCL. Without going into too much dull detail, what these technologies do is allow programmers to greatly speed up their programs by having them more easily use all of the processors in your Mac. All Macs have multiple processors, Mac Pros can have as many as 16 virtual processor cores. They also let programmers use the graphics card in your Mac to give a tremendous speed boost to certain kinds of math. As programmers start to use these tools, programs will get faster and faster.

There are lots of other even more minor changes too. Like support in Mail/iCal/Address Book, for MS Exchange servers.

The bottom line is, this isn't going to be like all the previous Mac OS X upgrades, where it's this big new thing. But it does have lots of optimization and new features beneath the surface, and for only $29, you definitely want to upgrade soon!