Grand Theft Auto: Coming Soon to a Mac Near You! 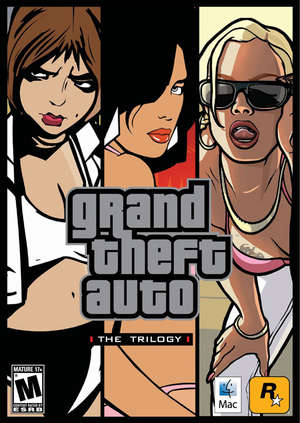 Amazing news for all the Mac users out there that love classic games. The Grand Theft Auto Trilogy is coming to Mac OS X! That's GTA: 3, GTA: Vice City and GTA: San Andreas. (No word on GTA: 4)

These three games are pretty old, released in 2001, 2002 and 2004 respectively. But all three of them were epic games. True classics in the gaming world, and I'm very happy to have them on Mac OS X. And they are priced accordingly, [Buy] $39.99 MSRP for the set.

As of this posting, the games aren't out yet, so there's no word on performance. But I heard that they were ported using a Windows compatibility layer, rather than being truly ported to native OS X frameworks. That means that the games should run at least a little slower than they run under Windows directly via BootCamp on your Mac. That said, GTA:3 and GTA:Vice City should still be able to run at full 1080p resolution on even current generation base modem Macs (Mac mini, MacBook). And they should play acceptably on much older Macs. nVidia 9400m's should work. Intel GMA X3100s may work with lower settings. Intel GMA 950 might be pushing it. Now GTA:San Andreas is a different story. It's a much more demanding game, graphically. I've played it acceptably on a 9400m graphics chip, at 720p resolution, but I doubt you could get it to work at all on older Intel GMA graphics.

But we're really digging through the crates here. All of the current low end 320m's should play all of these games very well. And all of the higher end graphics in the MacBook Pros, iMacs and Mac Pros should really be impressive.

Some other important things I haven't been able to find so far, are minimum requirements. The game might not install on some older Macs, even if the graphics chips could handle it. Also, there might be an operating system requirement. There's just not enough info at this point.

If you've only played these games on Playstation 2 and are interested in getting them for your Mac, you are in for a treat. The reason I know so much about these games is because I've been playing them on my MacBook Pro, via Windows 7, for a while now. I have a USB to Playstation adapter I use with a genuine Playstation controller. The graphics on my nVidia 320m are amazing! In Vice City, when you get in a helicopter at Starfish Island and take off, the detail of the island is breathtaking! And San Andreas is the same way. The graphics quality is an order of magnitude better than Playstation 2.

... and it gets better. Current generation Macs have a miniDisplayPort for an external monitor, and it supports audio. This means that with one video adapter, you can hook your Mac up to an HD TV's HDMI port, and play the game in full HD right on your television. This is how I've been playing my Grand Theft Auto games for a while now. If you're a Grand Theft Auto fan, you're going to love this!

Also I should warn parents out there, that these games are all rated M 17+, and they all earn that rating. These games really aren't made for youngsters.