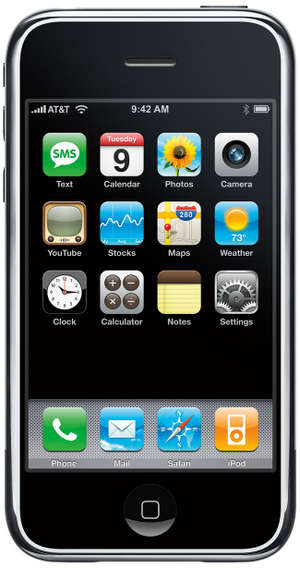 I went to the Apple Store Burlington today. No wonder my stock is going through the roof, these stores used to have a few people in them, now they are PACKED!

So anyway, I touched my first iPhone. It was pretty cool. But honestly, it wasn't THAT cool. I'd definitely like one, but I wasn't about to whip out the plastic on the spot to buy it. I found it hard to type on, but like they say, you probably get used to it quick. It had lots of other cool features too. But still, I'd much rather just open up my MacBook, vs trying to read my email on such a tiny little screen. Same with surfing the web. Youtube wouldn't work at all. The phones were active though, and I did make calls on it. But I hate talking on the phone anyway, so that didn't exactly blow my mind. I think that once you can use the phone as a bluetooth modem, using the unlimited internet access to allow your MacBook [Pro] to connect to the internet as needed, anywhere, then the phone will probably have even greater appeal. Also, 4GB isn't very much.

I think once Apple has an array of iPhone's, like they now have an array of iPods, they'll really take over the cell phone market. Meanwhile, the Apple Stores are packed, and my stock soars every day. :-)