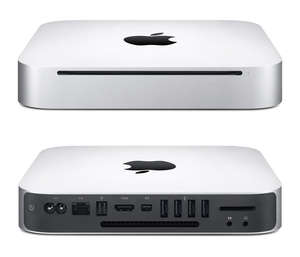 Every time Apple updates the Mac mini, some people are left disappointed. I think this is because such a nice, powerful little machine has so much potential filling all sorts of niches. The Mac mini is always one or two features away from being an amazing [fill in the blank]. The previous two Mac mini updates were great in my book. There were still a few more features I'd want, but it was still a great little machine. However, this most recent update is very disappointing to me. When it comes down to it, I feel like Apple just put the Mac mini in a fancy case, and then jacked the price.

It's true, they did upgrade the processor and the graphics chip. But they didn't put high-end processors and graphics in the mini, they just bumped them up to match the same low-end that the MacBook and MacBook Pro's have. High end mobile graphics, at least as an option, was one of the things on my Mac mini wish list. Something on par with what's in the more expensive MacBook Pros.

Apple also changed the video-out ports. From one miniDP plus one miniDVI port, to one miniDP and one HDMI port. Lots of people have been waiting for this for a long time. But again, I find this disappointing. miniDP to HDMI adapters are only $10. I would MUCH rather have seen the new Mac mini have two miniDP's, with a miniDP to HDMI adapter included in the box. That way they could still advertise it as "having HDMI", but it would give the mini a lot more versatility. Two large LCD displays powered by a single Mac mini would be a GREAT setup for 2D graphics, like print and web work.

Apple did add an SD card slot. Most of their laptops have an SD card slot too. It's very handy on a laptop. You're on the go, so you don't want to carry an extra USB device around. You just spin your MacBook around and stick the memory card in. But the Mac mini is a desktop. It's not a hassle keeping a card reader around. And the SD slot is on the back of the machine. The way most people set up their desks, the back of their Mac mini is not easily-accessible. I see the SD slot as more of a gimmick than a useable feature. Also, while I did have an expansion slot on my Mac mini wish list, I was thinking more along the lines of an ExpressCard slot, not an SD slot. That way you could install something like a dual port eSata card, and run up to 10 external hard drives through your mac mini. Or maybe a second gigabit ethernet port. A little expandability goes a long way. But the SD card... isn't it.

The new Mac mini has a fancy new 'Unibody' aluminum case like the MacBook Pros. And I agree, they do look nice. And they no longer have an external power supply, it's all included in the case, which is also nice. But, these are desktops. The biggest benefit of unibody isn't the look, it's the strength. MacBook Pro's are super rigid, which makes them much nicer to handle and work with. You don't handle a Mac mini. You put it on your desk, you tuck it's external power supply (on older models) in a corner somewhere, and you never give them another thought. This style of case is MUCH less necessary for a desktop computer. And I do not see this new case as justifying the $100 price increase, from $599 to $699.

$699 is a lot of money for an entry level desktop. This Mac mini still only has 2 GB of RAM, and you still need to buy a keyboard, mouse and monitor to go with it. It's as if Apple is trying to take the "features" of the 13" MacBook Pro (Apple's best selling Mac) over the MacBook, and apply them to the Mac mini. But it's a whole different story when you're talking desktops. The value just isn't there in my opinion. So in conclusion, I'm fairly disappointed by this new Mac mini upgrade. I was tentatively thinking about buying two of them before they came out. But i'm just going to stick with what I have for now.